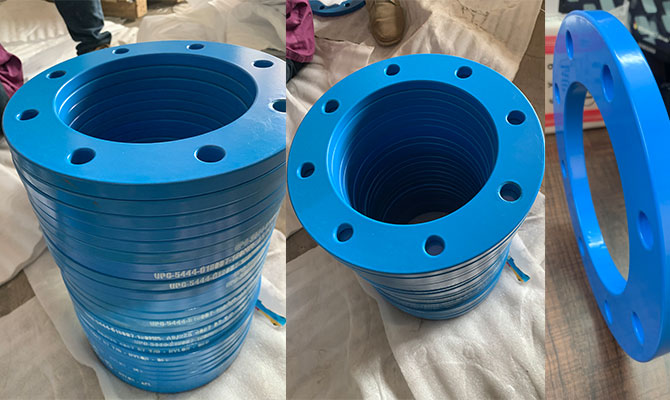 Difference in choice between using a full face flange or stub and backing ring. Now, a stub and backing ring has a ring that comes off and spins freely around it, and the seal is on the stub section here. whereas, on a full face flange the, in effect, stub and backing ring are all one part. so its all one part together, all fused together. so, why would you choose one over the other? well, full face flanges are cheaper than stubs and backing rings, that's one reason some people sometimes prefer to use full face flanges; but, the real reason is in the intallation. If you imagine we're installing a pipline and our pipeline is being flanged together, so there's flanges on the end of each pipeline, if we have a fixed flange - like this full face flange - one the end of each pipeline, when we try and marry the next one up to it, the holes have to marry up perfectly with this, because we haven't got any give at all in where the holes are on the flange on this side. that actually makes it quite difficult when you're assembling lengths of pipe which have already been flanged, because the flanges have to match up perfectly with the flange next to it.

If, however, you had a fixed flange on one end and then a flange like this with a spinning backing ring on the other, it doesn't matter where this flange is glued (fixed) on, because when this one marries up to it, we can always spin it and you can always match the holes up. So, a flange and backing ring make it much easier for installing a system.

If you imagine if you've got a pump or a gib valve or a big filter, which you're wanting to bolt a flange to, again, you can take your pipe work to it, you can connect your stub on, making sure your backing ring's already on the pipe before you glue (fixed) the stub on - otherwise, if you haven't, then you're never going to get the backing ring on that; that's a mistake people sometimes make.

So, if you glue (fixed) this on, you can then, at your leisure, marry it up to the pump, or marry it up to the flange, turn the ring to line up, and you can get it lining up perfectly. If you've got a full faced flange which you've already got glued (fixed) onto your pipe, and there's an elbow coming after it, its very difficult to get that match up perfectly onto the flange on the pump or on a valve, which might be fixed in place already. So, I tend to favour, wherever possible, use a flange and backing ring because its a much more flexible, much more easy to install part than the full face flanges.

Our Nylon Coated Backing Ring Flange are used in a wide range of applications and various industries. Below are a few of them:

Mechanical Testing Such as Tensile of Area